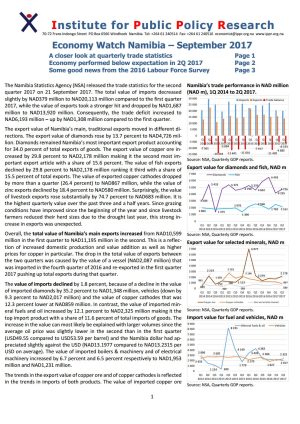 This edition of Economy Watch takes a closer look at the trade statistics for the second quarter of 2017. Both imports and exports decreased compared to the first quarter, with exports hit especially hard. Diamonds remained strong performers and livestock had one of the strongest quarters in years, while fish and copper exports suffered.

This report calls for a review of the way Customs and Excise records countries of origin and destination:

According to the Annual Trade Statistics for 2016, Switzerland was Namibia’s main export destination, because of the export of copper ore and copper cathodes… The possible explanation for this huge difference is that the headquarters of Glencore, one of the largest commodity traders, is based in Switzerland. While Glencore buys and sells commodities such as copper and copper cathodes, the products are not destined for Switzerland, but most likely for east Asia…

Accurate trade data is vital to inform our trade negotiations.