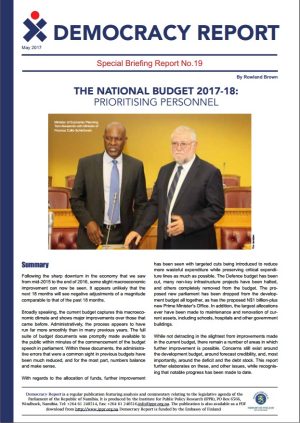 Our detailed analysis of the 2017-18 budget finds significant improvement over past efforts, but cautions that a lot more work needs to be done to return Namibia to a state of fiscal good health. Among the positives are cuts to the Defence Budget, as well as the cancellation of some non-key capital expenditure items such as the proposed new Parliament. However, despite improvement on the debt issue, levels of borrowing are still worryingly high and there is little margin for error.

As the report’s suggests, salary spending remains a key issue. The paper notes that in this budget

the majority of expenditure lines have been cut, while strong growth has been seen in the line of personnel expenditure… According to a number of statements by officials, we currently have a hiring freeze in Government – however, the budget documentation suggests that some 113 positions were filed in 2016/17 and, more importantly, that a further 11,088 positions are to be filed in 2017/18… the fact we already have an exceptionally bloated civil service is likely to create major issue for Namibia in the long term.