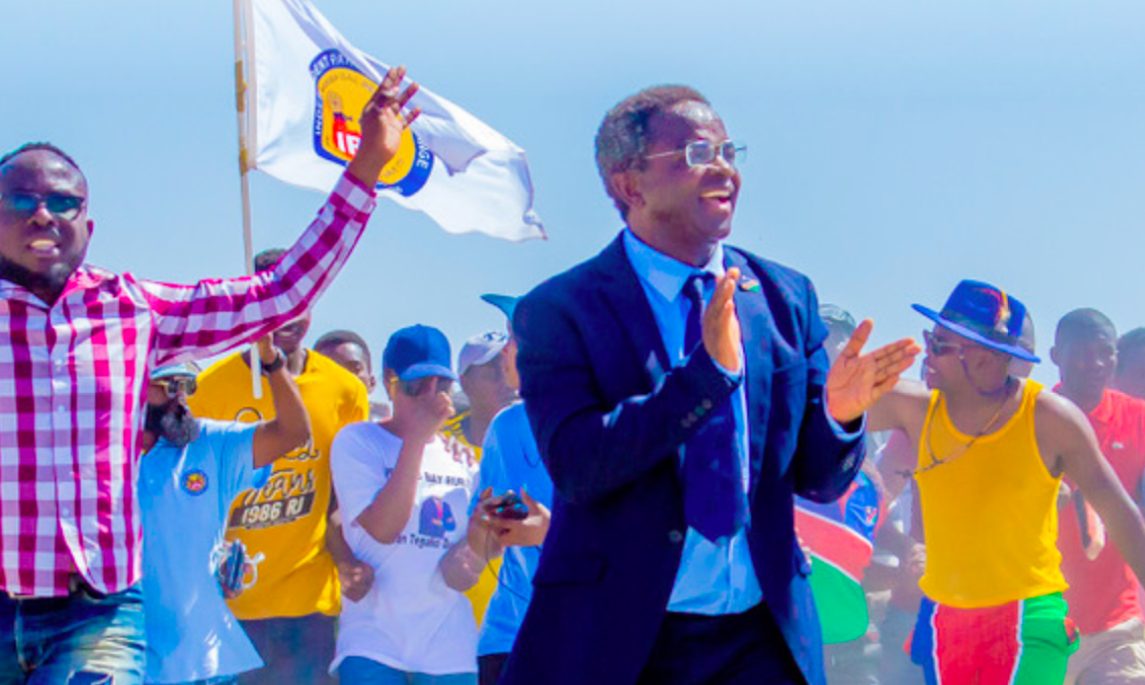 The recent local and regional elections produced few surprises. Swapo would have been hoping to maintain the 65% of the popular vote they achieved in 2019’s National Assembly elections. But with a year of more Fishrot revelations and an already battered economy coming under further pressure from COVID-19, the prospect of stabilising the Swapo vote share seemed like a forlorn hope. In addition, the party made little effort in 2020 to allay voter fears about corruption while adopting one of the lamest election slogans ever – “We have heard you”.
As a result, the party dropped to 57% support in the regional elections and 40% in the local authority poll. It’s not true that Swapo has been reduced to a ‘village party’ – as claimed by some opponents – but there is no doubt that the results made for grim reading among ruling party adherents. Some crumbs of comfort could be claimed – much of the north and the two Kavango regions remained loyal to the ruling party. An expected challenge by the Independent Patriots for Change (IPC) did not materialise in the main northern towns of Oshakati, Ongwediva, and Ondangwa. And most constituencies in Windhoek elected Swapo regional councillors, although this steady support in the capital was not enough for the ruling party to maintain its majority on the city council (only the much less important Khomas Regional Council).

At first glance, Swapo’s performance in the regional council election looks impressive – winning at least 88 constituencies out of the total 121. But this overall figure is heavily dependent on their northern support. The party only managed to cling on to a handful of seats south of Windhoek where the Landless People’s Movement (LPM) dominated. The ruling party lost the coastal region of Erongo including major urban centres like Walvis Bay and Swakopmund to the IPC. In Kunene, a resurgent United Democratic Front (UDF) combined with the Popular Democratic Movement (PDM) to regain control of the region from Swapo. The loss of key regions is embarrassing for a party that prides itself on the ‘One Namibia, One Nation’ slogan.
The first past-the-post system protected Swapo from further losses. A crowded opposition field in constituencies like Windhoek West and Khomasdal enabled Swapo to win with just over 30% of the vote. If the opposition had collaborated more widely then other constituencies were certainly winnable. The combined opposition vote beat Swapo in at least 16 constituencies where the Swapo candidate was declared the winner.
There was no such protection for Swapo in the local authority elections which uses the Proportional Representation party list system. The ruling party lost control of over 30 councils. Many of these were left in the hands of coalitions of opposition groups who are still negotiating how they can work together.

If there was any good news for Swapo in these elections – it is that the opposition challenge remains fractured. The ability of the LPM to expand beyond its heartlands in the south remains in doubt. The IPC performed outstandingly in certain areas (the coast and Windhoek East for example) but overall did not maintain the momentum of Dr. Panduleni Itula’s independent candidacy of 2019 (their national vote share in the regional elections was 18% as opposed to Itula’s 30% support last year). This is perhaps not surprising for a party that was formed just a few months before the election. Much will now depend on how the IPC organises itself and whether it can avoid the kind of internal tensions that brought down the Rally for Democracy and Progress and the Congress of Democrats. The PDM performed poorly for a party that has the tag of ‘official opposition’ – gaining just 7% of the vote in the regional ballot (only slightly ahead of the LPM).
The much-talked about ‘independent candidate’ phenomenon mostly fizzled out – except for strong performances by three such candidates in the Zambezi region. An erstwhile Swapo Party Youth League activist who stood as an independent also took Rundu Rural. With Swapo tightening its rules to prevent another Itula-type breakaway, 2020 may prove to be a lacklustre highpoint for the independents.
The poor performance of the Affirmative Repositioning (AR) organisation outside Windhoek was eclipsed by the selection of Dr. Job Amupanda as mayor of the capital city. Although AR only received 14% of the popular vote in Windhoek, an alliance with unlikely bedfellows (the PDM and IPC do not share Amupanda’s radical ideology) enabled the Unam academic to occupy the mayoral post for a year. This gives AR the chance to demonstrate that its prowess is based on more than social media rhetoric.

Swapo’s reaction to these results has been oddly muted. While party supporters’ WhatsApp groups buzzed with calls for urgent corrective action, the official response has been somewhat complacent. What is clear is that if Swapo continues shedding support at similar rates in the run up to the next election – it will fall below fifty percent of the vote. This means it may be forced to seek a formal coalition or at least a pact with a leading opposition party. The second possibility is that the ruling party could retain the majority of seats in the National Assembly but not win the presidency. This would create constitutional conundrums and potentially conflicts that would require a lot of goodwill and compromise to overcome.
The recent elections also have repercussions for the Swapo succession issue which is likely to come into focus before the next party congress due at the end of 2022. Does the party stick with elderly figures like Nangolo Mbumba or Netumbo Nandi-Ndaitwah – who could turn out to be electoral albatrosses around the party’s neck – or select a younger candidate (of which it has to be said there are not a great number of likely prospects)? Prime Minister Saara Kuugongelwa-Amadhila may emerge as a compromise candidate – being somehow identified with the party old guard yet still in her mid-fifties.
Any ‘build back better strategy’ to regain support before 2024 will require much more vigour and honesty than has been shown in the rather fatalistic response of the party grandees so far. At the same time, the opposition will have to look beyond a regionalist approach if they are to pose a serious challenge on a national level. It could be that the IPC emerges as a clear opposition frontrunner by 2024 or that parties decide to collaborate or merge (something they have not managed to do over three decades).

By Graham Hopwood, the Executive Director of the Institute for Public Policy Research (IPPR). This blog is an adapted version of an article that first appeared in The Namibian newspaper