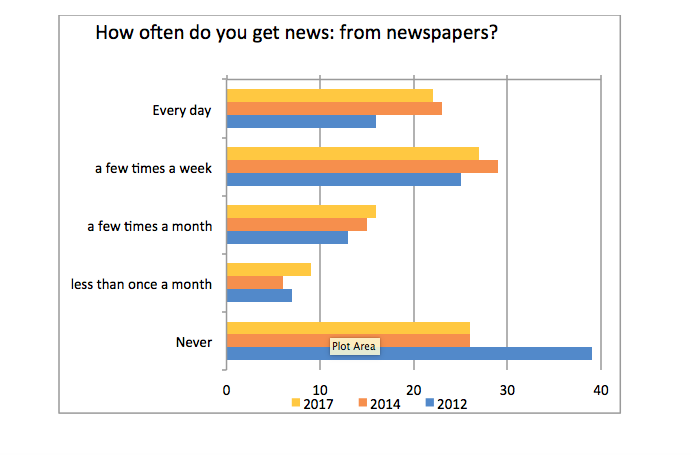 Digitalisation is transforming how media products are both created and accessed. Consumers can now exercise more control over their media use in terms of how they access content. Consumers are increasingly likely to only access a few stories from newspapers or TV stations rather than reading a newspaper from cover to cover or watching an entire news bulletin. These stories are accessed online via social media platforms, digital media or search engines – mostly for little or no monetary gain for the respective media outlet. On the positive side, digitalisation has led to new and innovative ways of presenting content and engaging with consumers.

Since the early 2000s, more than half the jobs in the US news industry have disappeared; and while online news provision has created employment it has not been enough to replace the lost newspaper jobs. This trend has been replicated around the world – although to different extents and sometimes with different dynamics at play. But this ongoing transformation is not just about job losses. Journalism’s ability to hold powerful leaders and entities to account has been undermined. Newsrooms have been closed or decimated and the capacity for investigative journalism has been diminished.

Digitalisation has significantly disrupted and eroded long-established sources of income for media houses, particular for traditional media such as newspapers and magazines however, TV and radio are also being affected. Marketing and advertising revenue – the primary source of income for many media operations – is shifting to online platforms and their associated technology companies. Print media – specifically newspapers and magazines – have been especially hard hit by this trend. In addition, newspaper circulation figures have declined in most regions of the world over recent years, resulting in falling sales revenue and further decreasing print’s attractiveness for advertisers.

Media businesses particularly those focused on news and public interest issues traditionally base their business on a “dual market” system to generate revenue. Essentially the media sell news to individuals as well as selling advertising space – this adds to the complexity of media houses’ operations as they cater for two greatly differing clients

At its core the challenge of digitalisation to media businesses is two-fold: firstly, the dual market system is crumbling as customers increasingly prefer to access free content online and advertisers shift their money to online platforms such as Facebook and Google. Secondly, many media houses have invested in and developed their online presence, but in general these investments have not resulted in significant new revenue streams. For media businesses worldwide, there is still no clear method of making money from online content

This disruptive transformation of the media business environment creates significant sustainability concerns for the industry. It can be argued that Namibia’s media has not yet undergone a comprehensive and far-reaching transformative disruption process brought about by digitalisation. However, this does not mean that local media houses can be complacent with regards to this phenomenon. There are strong indications, that digital media and related challenges are already transforming Namibia’s media landscape. A local media industry that finds itself increasingly under financial pressure due to a failing business model also means that reporting standards, quality journalism and media diversity are constrained and undermined. Namibia’s press freedom is likely to suffer if media houses fail to adequately address the digital challenge.

We only have limited quantitative data to help trace the digital transformation of Namibia’s media landscape. Nevertheless, it is becoming clear that digitalisation is affecting the country’s media houses in several ways:

Several business managers at Namibia’s media houses argue that the current pressure on the industry is primarily due to the poor economic situation in the country rather than digitalisation. It remains far from certain if Namibia’s media industry is fully aware and has the leadership, resources and vision to deal with the digital revolution.

Namibia’s media will have to commit to taking some bold steps to ensure their sustainability and relevance in the 21st century. There are a number of approaches being developed globally which Namibian media houses can adapt for local circumstances including subscription models, seeking donor and corporate support, reader donations, and pay walls that can range from limited to comprehensive. At the same time media houses should continue to respond to advertisers’ needs. It is clear that there is no ‘magic bullet’ that can deal with the challenge of digitalisation – however, strategic and innovative thinking will be key to future growth.

This article is based on the recently published IPPR research report, Namibia’s Media – Facing the Digital Challenge, which can be downloaded here – https://ippr.org.na/publication/namibias-media-facing-the-digital-challenge/